If I had one month left to live.

I would focus on Steven… Baby Steven, who gets mad when I call him “baby” because he is thirteen now… but he will always be my baby.  He will always be frozen as the boy I need to protect with my life.  The one I watched out of the side mirror of the car almost get hit by a speeding car crossing the street in a parking lot.  He will always be the baby that came home from kindergarten with bruises every day because he was getting bullied.

The pain. The anger. The heartbreaking feeling everyday. 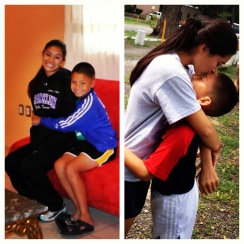 The boy who used to come to my all boy’s team soccer practice with boys four years older than him.  The one who heard the obscenities freshman high school boys say and their pubescent thoughts as a nine-year-old.  As the only girl on the all boys’ team, I grabbed the boy who was teasing him about him not sexualizing girls by the shirt and told him that if he did not stop speaking so disrespectfully in front of my little brother that I would fight him.  I would have gotten my butt handed to me, but he was mine to protect and I didn’t know any other way to protect him.

Now he hovers over me with a deep voice and strong muscles.  But I instinctively still try to hold his hand when we cross the street.  I still kiss him on the forehead like I did when he only reached chest height. I still make my voice sweeter when I talk to him so I don’t hurt his feelings even though it makes no difference to him. 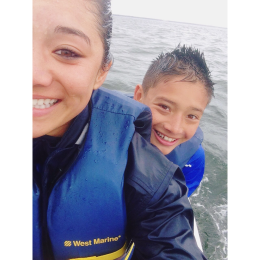 He is a much better soccer player than I am now, but I still coach him as I did when he was just learning to kick a ball.  I still lecture him about hanging around the right groups of friends even though he has a mind of his own to make those decisions and calls. I still facetime him to make sure he is eating right and hydrating and getting enough sleep… even though my parents are there to take care of that.

He is across the country from me since I am in college and I have never missed home as a place.  I miss it every day as I miss my baby brother.  I miss it as I live with the reality that he grew up without my brother and I to take care of him all these years.  He has to become comfortable in his own skin without me to remind him how great he is. He is becoming the person he will likely be without me there to guild him.  Without me there to tell him that being kind to everyone is never the wrong choice.  He is not there to learn from my mistakes, he has to make his own and that is hard to accept because he is my baby…

One thought on “One Month Left to Live”